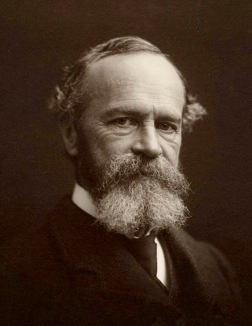 William James, often considered the father of American psychology, was born in New York City, but spent much of his childhood traveling between the United States and Europe, where he attended several private schools. James’ interest in such varied fields as philosophy, religion, and science were cultivated at home in an enriched environment shared with his brother Henry James, the famous author. William James struggled to find a vocation that suited his various interests, trying his hand at art, chemistry, and finally, medicine. He received his MD from Harvard in 1868.

In 1872, James began teaching physiology at Harvard but was preoccupied by his ongoing and deep interest in such philosophical issues as free will and determinism. Though James considered himself a temporary dabbler in the discipline of psychology, his two-volume textbook, Principles of Psychology (1890), stood as the field’s definitive textbook through the first half of this century. It is still considered one of the best-written texts on psychology and a source of many original ideas. James’ contributions to psychology include the notion of a stream of consciousness, the importance of habit and instinct, and a complex theory of the self, theory of emotion, and opening the boundaries of psychology to include topics such as religious beliefs.