Trait theory seeks to explain, in a straightforward way, the consistencies in individuals’ behavior.  Traits are enduring patterns of behavior, such as thinking acting, and feeling, that are relatively consistent across different situations.  Traits tend to lead to characteristic responses:

For the last two decades, the most influential trait approach contends that five traits or factors lie at the core of personality

The Five-Factor Model of Personality

The big five factors of personality (“supertraits”) are thought to describe the main dimensions of personality—specifically, neuroticism (emotional instability), extraversion, openness to experience, agreeableness, and conscientiousness.

Use the acronym OCEAN to remember the big five personality factors: 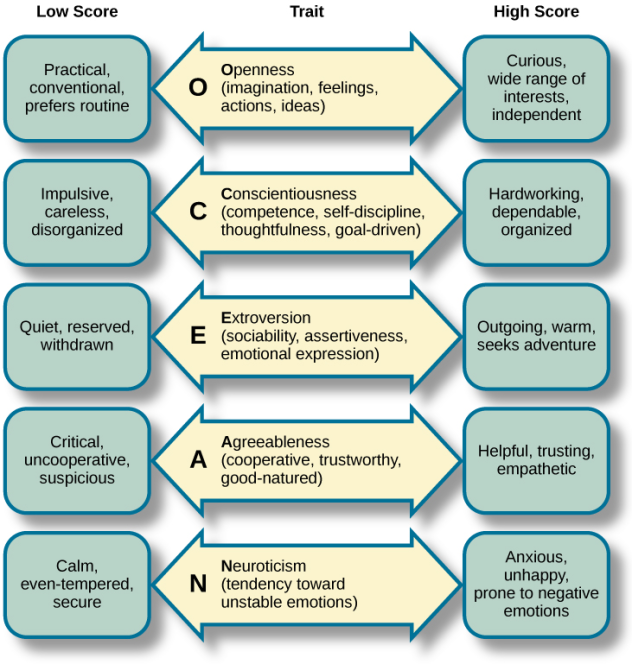 Sometimes referred to as the father of American personality psychology, Allport was particularly bothered by the negative view of humanity that psychoanalysis portrayed:

In the late 1930s, Allport and his colleague H.S. Odbert (1936) identified 4500 words (traits) that could be used to describe a person—a method called the lexical approach.

In 1946, Raymond Cattell applied the relatively new statistical procedure of factor analysis to the Allport and Odbert traits.

In 1963, W.T. Norman reanalyzed Cattell’s data and concluded that only five factors were needed to summarize these traits.

Genetic or biological factors of personality focus on biological and physiological factors as determinants of behavior. Trait theory is a means to explain in a straightforward way the consistencies in a person’s behavior. Traits are described as behavioral patterns; thinking, acting, and feeling that are relatively consistent in people in different situations and those traits determine specific characteristic responses.

Biological factors of personality according to the beliefs and research of Gordon Allport. are that people can be described in terms of the basic way they behave. Referred to as the father of American personality psychology, Allport disagreed with the negative views of humanity that Freudian psychoanalytical perspectives portrayed. In response to the Freudian/NeoFreudian perspectives of personality Allport rejected the theory that the unconscious was central to understanding personality. Allport believed that to understand healthy behavior that one must focus on the individual’s life in the present, not his or her childhood experiences. In defining personality, Allport stressed that individual uniqueness is derived from the person’s capacity to adapt to the environment and Allport concluded that the ability to adapt is derived by genetic, biological personality traits.

The trait approach is comprised of three basic assumptions. These assumptions are that specific genetics or traits are relatively consistent and can be predicted over time, across situations, and that people with the same traits will differ contingent upon the level of trait possessed. Allport’s original trait theory consisted of central and secondary traits. Allport and his colleague H.S. Odbert, identified 4500 words or traits that could be used to describe a person; this method of determining personality was referred to as the lexical approach. In response to this method, Raymond Cattell applied factor analysis to the Allport and Odbert traits and concluded that 16 underlying factors of personality could summarize the lexical data. This work led to the development of Cattell’s 16PF personality scale. W.T. Norman reanalyzed Cattell’s data and concluded that only five factors were needed to determine personality traits. To date, these five traits are known as the “Big Five Model of Personality.” The big five traits are openness, conscientiousness, extraversion, agreeableness, and neuroticism.

After researching the big five traits using factor analysis Hans Eysenck concluded that personality is determined by two factors, Introversion/Extraversion and Emotionality/Stability. Eysenck argued that personality variations were related to one’s biology specifically the nervous system and the individual’s brain. Eysenck suggested a connection between extroverts inheriting lower levels of arousal and introverts inheriting higher levels of arousal. Eysenck also argued the different levels of stress that one could tolerate would influence a person’s stability or emotional instability.