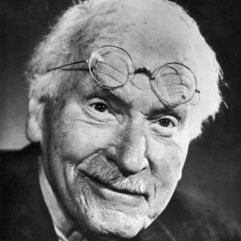 Swiss psychiatrist Carl Gustav Jung was born July 26, 1875, in Kesswil, Switzerland. The only son of a Protestant clergyman, Jung was a quiet, observant child who packed a certain loneliness in his single-child status. However, perhaps as a result of that isolation, he spent hours observing the roles of the adults around him, something that no doubt shaped his later career and work.
Jung attended the University of Basel. There, he was exposed to numerous fields of study, including biology, paleontology, religion and archaeology, before finally settling on medicine. Jung graduated the University of Basel in 1900 and obtained his M.D. two years later from the University of Zurich.
Carl Jung established analytical psychology. He advanced the idea of introvert and extrovert personalities and the power of the unconscious.
He collaborated with Sigmund Freud, but disagreed with him about the sexual basis of neuroses. Jung founded analytical psychology, advancing the idea of introvert and extrovert personalities, archetypes and the power of the unconscious. Jung published numerous works during his lifetime, and his ideas have had reverberations traveling beyond the field of psychiatry, extending into art, literature and religion as well. He died in 1961.Over a five-year period beginning in 1907, the two men worked closely together, and Jung was widely believed to be the one who would continue the work of the elder Freud. However, viewpoints and temperament ended their collaboration and, eventually their friendship. In particular, Jung challenged Freud’s beliefs around sexuality as the foundation of neurosis. He also disagreed with Freud’s methods, asserting that the elder psychologist’s work was too one-sided.
The final break came in 1912 when Jung published Psychology of the Unconscious. In it, Jung examined the unconscious mind and tried to understand the symbolic meaning of its contents. In the process, the work also took head-on a number of Freud’s theories.