Grew out of the work of Carl Rogers and Abraham Maslow Humanistic perspective emphasizes the responsibility people have for their own behavior, even when their behavior is seen as abnormal.

Concentrates on what is uniquely human, viewing people as basically rational, oriented toward a social world, and motivated to seek self-actualization (Rogers, 1995). 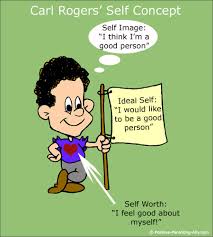 Focus on the relationship of the individual to society, considering the ways in which people view themselves in relation to others and see their place in the world.

Views people as having an awareness of life and of themselves that leads them to search for meaning and self-worth.

Though criticized for its reliance on unscientific, unverifiable information and its vague, almost philosophical formulations, it offers a distinctive view of abnormal behavior.

The concept of the “self” is central to the personality theory of Carl Rogers and other humanists.  Our self-concept is our subjective perception of who we are and what we are like

The concept of self is learned from our interactions with others.

Unconditional positive regard communicates that the person is inherently worthy of love, regardless of accomplishments or behavior.

Carl Rogers believed that we are born with an innate need for positive regard—for acceptance, sympathy, and love from others.

Ideally, positive regard received from the parents is unconditional—that is, independent of how the child behaves.

A major tenet of humanistic psychology is that humans possess an inner drive to grow, improve, and use their potential to the fullest
Abraham Maslow calls the ultimate in completed growth self-actualization.

According to Maslow, the self-actualizing person is reaching the highest level of personal development and has fully realized her or his potential as a human being.

Maslow proposed that needs are arranged in a hierarchy.

After meeting our more basic needs, we experience need progression and focus on needs at the next level.

If a need at a lower level is no longer satisfied, we experience need regression and focus once again on meeting that lower-level need.